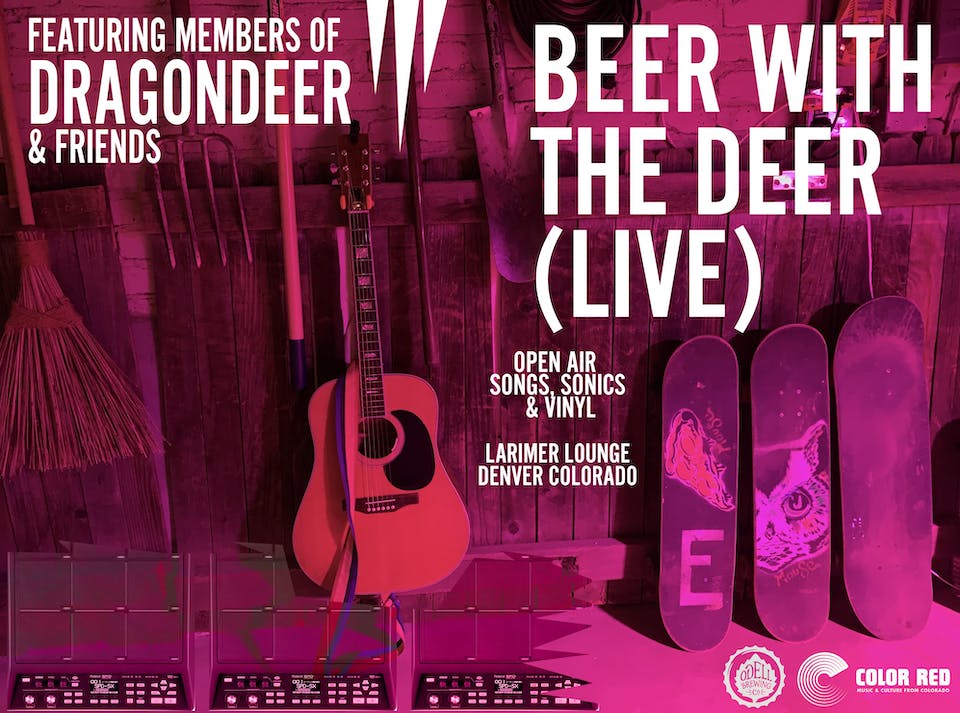 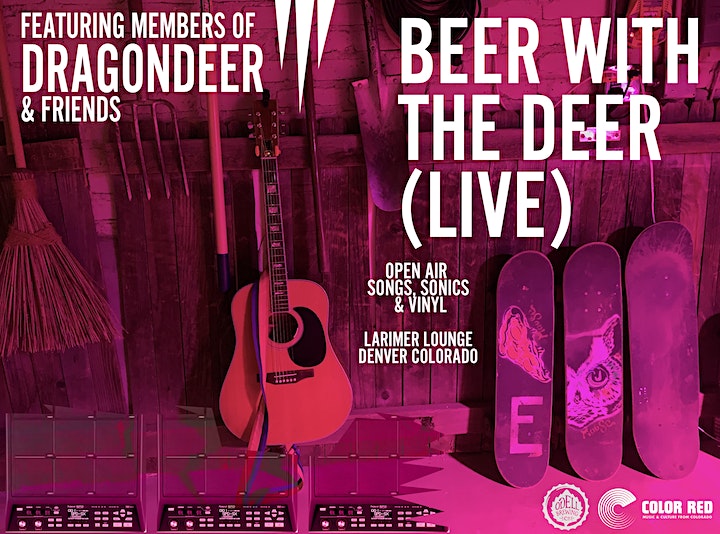 △ Beer with the Deer (Live)

Join members of Dragondeer & Friends for a beer, song, sonics & vinyl in the open air* to our front patio at Larimer Lounge in Denver. Song stretching, sonic exploration and vinyl records from funk to punk all included in this social distanced hang ♥ △

Reserve a table and guarantee your spot for you and your friends now!

Dragondeer recorded the record with producer Mark Howard (Bob Dylan, Willie Nelson, Neil Young, Lucinda Williams, Tom Waits) in California's storied Topanga Canyon. The record will be out digitally worldwide on March 2nd via VQ Creative / Kobalt. "Dragondeer hit the stage with their thick blues rock sound. Reminiscent of early Led Zeppelin, The Black Keys, and electric Taj Mahal, the quartet stunned the audience with their hybrid of Mississippi Delta blues and 1960s psychedelic rock. Lead vocalist, guitarist and harmonica player Eric Halborg led the band with a rare ferocity, his deep growl and swampy harmonica blending perfectly with Cole Rudy’s raw pedal steel playing. Shocking many in attendance and quickly catapulting onto the Denver scene, Dragondeer is a growing force to be reckoned with." - Live For Live MusicDRAGONDEER | IF YOU GOT THE BLUESWhen asked about the inspiration for their new album, recorded in the hills of Topanga Canyon, the members of Denver-based Dragondeer, all describe a similarly surreal scene. Each mined solace from the bucolic, unfamiliar surroundings, which, according to bassist Casey Sidwell was, “somehow soothing and creepy all at once.” From the opening soul-dirge title track of If You Got the Blues, the debut full length album from Dragondeer, the effect of the atmosphere is prominent. This spacious, blues epic comes out of the gate with a whisper that has as much place on the Sandlot soundtrack as it does in an LA afterhours bar. “It's a love song,” says frontman Eric Halborg of the title track, “a song that I felt gut punched in such a good way each time we played it back during the sessions.” It has all the familiarity of a love song but is delivered with an earnestness and honesty that makes it, by virtue, singular. Blasting into the aptly titled “Amarillo Bump,” which starts like CCR’s “Run Through the Jungle”, the album begins to flex the diversity that it displays throughout its course. The integrity of the musicians, with a total lack of cynicism, makes the music heart wrenching and entirely believable. The confident restraint of the rhythm section, featuring Sidwell and Carl Sorensen (drums), slinks through the album with the virtuosity of old hands and remains committed to authentically interpreting the music that this album draws its inspiration from. String savant, Cole Rudy, provides the texture this record hangs its sonic hat on. Switching gears between sinister, ethereal, funky, and down home, evident in his work on songs like “Won’t Back Down” and “Same Train”. Out front, the chronically smooth voice of Eric Halborg ties the album together with occasional help from his blistering blues harp. The anthemic “Broadway Avenue” showcases his penchant for melding a beach attitude with the griminess of the blues. Listened to as a whole, the album plays like a blend of stoner ethos, Dr. Hook-esque country-funk, and psychonaut blues. So it stands to reason that the band would find the far-flung isolation of west LA County an appropriate muse. “I slept and woke up outdoors every morning to perfect weather overlooking the canyon,” recalls Rudy. “I would take runs above the house through the low clouds on the trails and it seemed like I was on another planet.” Perhaps the biggest influence on the album, however, was esteemed producer, Mark Howard, whose resume reads like a record nerd’s inventory list. Bob Dylan, Tom Waits, REM, Neil Young, Lucinda Williams are just a few among a bevy of legendary recording artists he has called clients. Halborg notes, succinctly, “Mark Howard is a master who has worked with masters.” His mastery is on obvious display across “If You’ve Got the Blues,” with a deft use of space, and a supreme talent for finding the performance. American music, with the blues in particular, has been interpreted, replicated, and regurgitated in almost every conceivable fashion, which makes it all the more compelling when a new unique incarnation comes along. Culled from the vestiges of some of the most important bands Colorado has ever produced, Dragondeer has conjured a singular and neoteric sound that both nods to the past and eschews fears of modern influence. They draw from all corners of the American sound including the vicious edges of Elmore James, the hypnotic repetition of Junior Kimbrough, the wailing harmonica of Sonny Boy Williamson, and the smooth psychedelia of Taj Mahal. Paired with pieces of Sly Stone, Captain Beefheart, the longform leanings of the hippie revolution a la The Grateful Dead, and the agony of American soul music, these influences have helped Dragondeer carve a niche at a crossroads of music that has remained largely unexplored. “If You’ve Got the Blues” is a testament to Dragondeer’s songwriting, musicianship, and purity. It’s also a personal manifesto for the band, whose beli