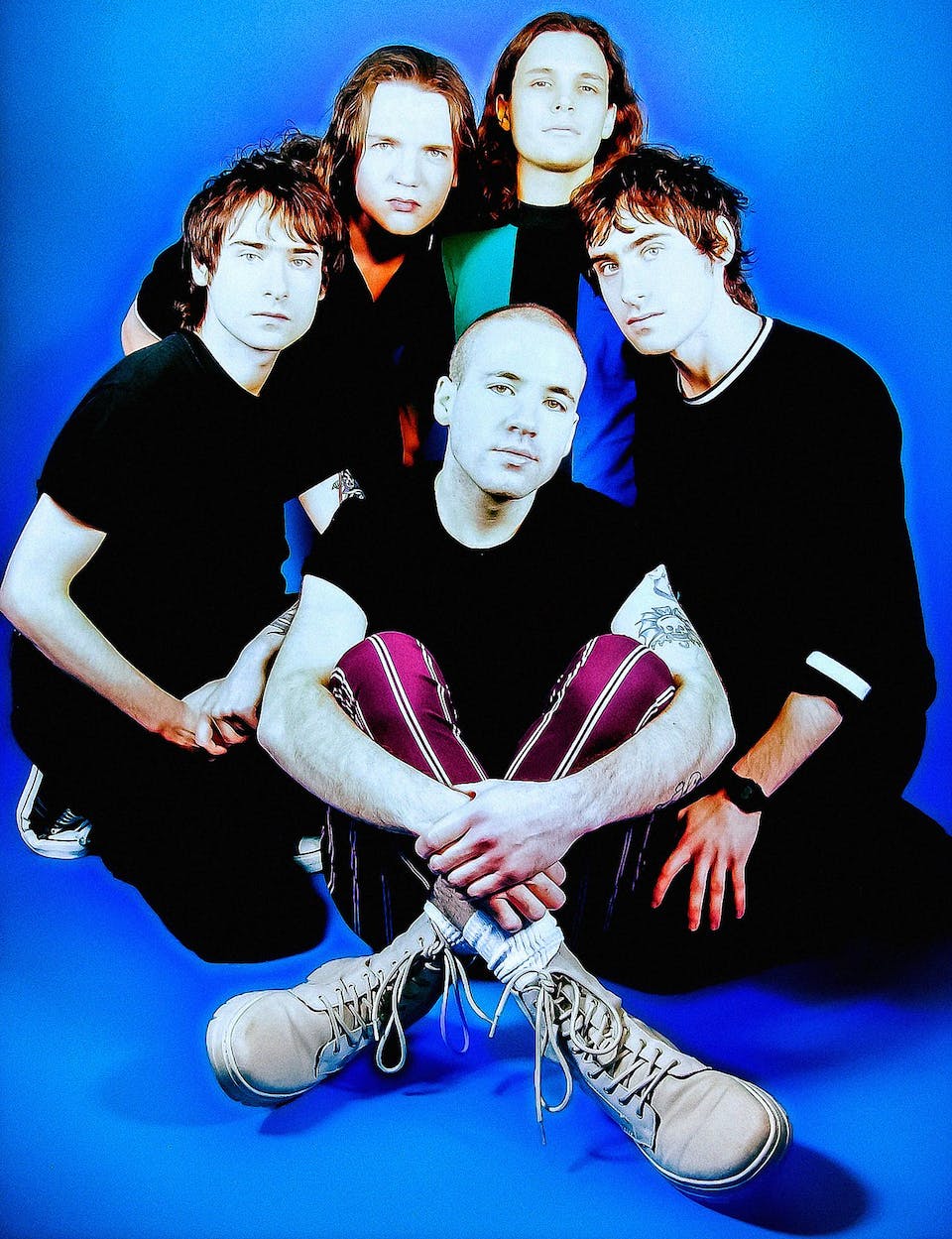 The Dirty Nil, The Paranoyds

THIS EVENT IS 16 AND OVER ALL SALES ARE FINAL.

REVIEW YOUR ORDER CAREFULLY, THERE ARE NO REFUNDS FOR ANY REASON. TICKETS ARE NON-TRANSFERABLE. NO TICKETS ARE MAILED TO YOU, YOUR NAME WILL BE ON THE WILL CALL LIST NIGHT OF SHOW. NIGHT OF SHOW (1) BRING A VALID GOVERNMENT ISSUED ID AND (2) PRINT YOUR CONFIRMATION E-MAIL AND BRING WITH YOU NIGHT OF SHOW.

Nurturing arena-sized ambitions, Louisville, KY's White Reaper remind us that "fun as hell" is a primary purpose of music. Equal parts glam and grit, White Reaper's forthcoming Elektra Records debut finds the band packing classic rock with grinning twin guitar leads into masterly crafted pop songs. Expected later this year, the album will follow 2017’s critically acclaimed The World’s Best American Band, which was praised by Pitchfork for having "more riffs than you can fit into the trunk of a Camaro". White Reaper recently treated fans to an early taste of new music with the release of their brand new single “Might Be Right”.

Tony Esposito (guitar/vocals), Ryan Hater (keyboards), Sam Wilkerson (bass), Nick Wilkerson (drums), and Hunter Thompson (guitar) have been living on the road, performing headline shows and supporting some of their idols - The Killers, Spoon, and Weezer. The band has also been making rounds in the festival circuit with stops at Lollapalooza, ACL, and CalJam. This summer, the Kentucky boys will embark on a run of U.S. headline dates and perform their inaugural sets at the UK’s Reading and Leeds festivals. In the fall, the band will hit the road on their largest U.S. headline tour to date.

Sure, playing 350 shows over the past three years all over the world was pretty impressive. Opening for The Who in front of 50,000 people? Not bad for a couple of loudmouths from the quaint, quiet valley town of Dundas, Ontario. And, sure, winning the Juno Award for Breakthrough Group of the Year made the parents proud. But of all the accomplishments that Hamilton-based power trio The Dirty Nil have ticked off their bucket list since coughing up their debut single, "Fuckin' Up Young," in 2011, nothing tops the honour that was bestowed upon them back on March 23, 2015.

"If you go on Reddit," drummer Kyle Fisher begins, "a video that we had on our Instagram made the top listing of the WTF page! We were staying at a hotel in East Dallas -- which we later found out was not a good place to stay. The only room available was a smoking room with that shitty plastic covering on the mattress. And it was a weird night there, with police and drug dealers out in the halls. But when we woke up in the morning, and opened the door, there was a huge, long trail of ants going from one end of the hallway to the other end!"

Like any group of true artists, The Dirty Nil channel trauma into their music... and on the band's second album, Master Volume, the harrowing experience of seeing the inside of America's most disgusting hotels, night in and night out, manifests itself in the song "Super 8." "I'm halfway to hell/ It's called Super 8 Motel," Luke Bentham sings, stretching out the words with the palpable pain of someone who's struggling to catch some precious between-gigs shut-eye on a mattress riddled with bed bugs and stains of dubious origin. But for The Dirty Nil, the effects of non-stop touring go way beyond translating one-star Trip Advisor reviews into song.

The Dirty Nil didn't just spend the past few years on the road in support of their debut album, Higher Power and companion collection of early singles, Minimum R&B. They spent of much of it opening for -- and, more importantly, studying -- the greats: Against Me, Billy Talent, Alexisonaire. They're bands who, like the Nil, cut their teeth for years on the punk circuit playing the dingiest of dives, but now aind themselves playing arenas and headlining festivals. With Master Volume, The Dirty Nil are ready to make the same leap -- not by polishing their sound for radio, but by bulking it up to aill the stadiums and open aields of their most vivid rock 'n' roll fantasies.

Says Luke, "I think the experience of playing with bands like Against Me -- bands that can put on a proper fucking rock show -- and seeing what works in a big space deainitely crept into the way we think about songs, and how to sound powerful. A lot of the times, when you play blitzkrieg-fast, it has a way of sounding awesome in a club. But when you're playing in a giant space with some sound guy who's never seen you before mixing you, it can be a roll of the dice."

Adds Kyle, "Everyone says, 'a good song's a good song no matter how it's recorded.' But a good song can't be a good song if nobody can hear it properly!"

Produced by veteran alt-rock architect John Goodmanson, Master Volume is an album that crunches and grooves where the band once smashed and thrashed, unleashing the Nil's undiminished raw power in more controlled waves to better target the back rows. "It's less of a sprint and more of a strut," Luke says, and he credits a great deal of the tempo shift to the arrival of Ross Miller, who replaced original bassist Dave Nardi in early 2017. While Ross was already a longtime friend of Luke and Kyle, his pedigree includes playing with everyone from Wanda Jackson to Single Mothers.

"I'm a big fan of the drums," Ross says, "so my intention on the bass is to make the drums sound the best they can -- Kyle always comes up with cool grooves and I don't want to fuck that up. I want there to be lots of space so everything shines through."

Adds Luke: "It takes a lot of conaidence to play slower and have a discernible pulse, and Ross totally bounces! And Kyle plays hip-hop style drums when he's in his natural element, so it was fun making songs around that. I would come up with some chords and lyrics and melodies, and they would be totally moulded around what the fuckin' Funk Brothers were laying down over here."

Now, we should be clear that The Dirty Nil have not transformed themselves into a shirtless, bass-slappin,' Chili Peppered punk-funk unit... not that there's anything wrong with that. After all, the band were stoked to work with Goodmanson not because he's produced Sleater-Kinney or Bikini Kill or Blonde Redhead or any number of highly respected indie-rock acts; they were more impressed by his mosh- friendly credentials. Says Luke, "We just fucking punished him the entire time for nu- metal stories. 'Death Cab for Cutie? We don't give a shit! Tell us about Saliva!' I think one of the most important and liberating things about the climate in which we made this album is that we celebrate white noise and Sugar Ray and everything in between. We don't give a shit. We like all rock music, even terrible rock music. We'll listen to Kill Em All and My War and then we'll just listen to Aerosmith and St. Anger."

And they'll also shamelessly steal song titles from The Beatles ("Please, Please Me") and Cheap Trick ("Auf Wiedersehen") just for shits 'n' giggles. ("We're improving them," Luke says with an unsubtle grin.) But the joy and bravado with which the Nil deliver Master Volume's pummelling power-pop missives bely the often grim narratives embedded within. The airst two songs alone -- "That's What Heaven Feels Like" and "Bathed in Light" -- aind Luke dying in two different car crashes, alying through smashed windshields and talking to his deceased grandma in heaven; "Always High" sees him eulogizing an ill-fated driver lying on the roadside with their head split open. ("What can I say, most of the rock 'n' roll I've consumed in my lifetime has something to do with fast cars, as Van Halen as that sounds," Luke reasons. "And we've deainitely seen our share of roadside carnage travelling in the Southern states.) "I Don't Want That Phone Call" is an even more brutally frank treatise on impending death, with Luke pleading to an addict friend to get help and spare him the inevitable call from the morgue. And sure, the album has two songs that could practically qualify as ballads, but the airst one ("Auf Wiedersehen") unleashes its ache in a throat-shredding chorus of "FUCK YOU," and the second ("Evil Side") builds to an atomic, noise-blasted climax that, when the band perform it in concert, is liable to trigger an earthquake that swallows up the circle pit.

"I don't ever sit down and say, 'I'm going to write about a song about this today,'" Luke explains. "I just open my mouth and start playing... and some pretty heinous shit comes out! I deainitely enjoy morbid subject matter of all spades, but I like to try to alash a smirk in there with it, because I think it's important to paint with different brushes. And listening to certain writers I love, like Townes Van Zandt -- he has that sort of bleakness, but also with a little bit of humour with it."

Loaded with steady-grooving songs about living fast and life-afairming anthems about dying young, Master Volume ultimately ampliaies The Dirty Nil's most essential quality: their refusal to be deained. They're too melodic and muscular to be purely punk, but too raucous and unhinged to pass as straight pop; too cheeky to be overtly political, but still acutely in tune with the unsettled, anxious energy of the times in which we live. Whether you aind catharsis in a crowd-surf or a street protest, Master Volume captures the ecstatic rush of getting swept up in a communal moment... and the frantic fear that it can all come crashing down at any second.

Luke concludes with a laugh "we don't really have a label for ourselves other than just... the best band. That's our genre!"